The Veritas Centre is located right by the water's edge, in a beautiful 30-hectare natural area at Høvikodden in Bærum, a 10-minute drive from central Oslo. Shuttle buses bring Det Norske Veritas (DNV) employees to work from Skøyen and the bus terminal in Sandvika.

“I was a little concerned about living in Oslo and commuting to Høvik, but there are shuttle buses at the start and end of the day, so the commute is very comfortable. In addition, the view and the area here are incredibly beautiful, so it’s absolutely worth the commute. When the weather is nice, we usually go for a walk around the Veritas campus or end the day by jumping into the fjord and having a refreshing swim.

Several people on our team also take a ‘kayak lunch’, which looks like a lot of fun. 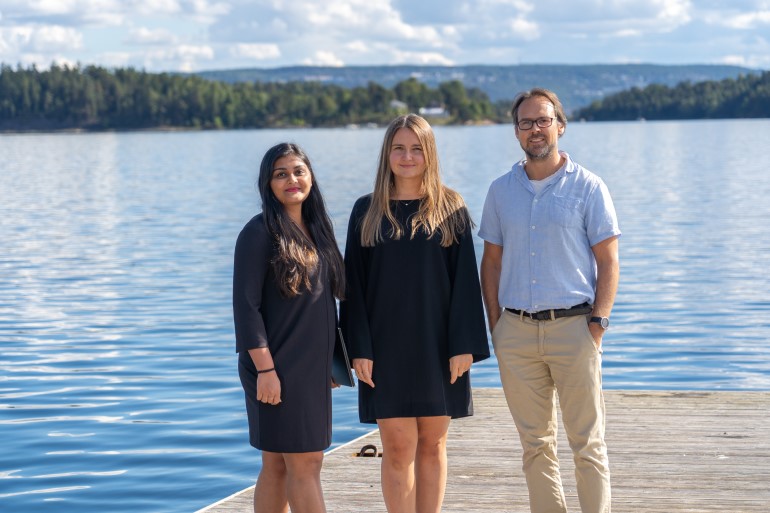 So says Kinga Kocemba, who we meet at the Veritas Centre together with her colleague Anupma Kumari and their manager Øyvind Strand on a sunny day in September. All three work in the development section of DNV's Veracity Data Platform, and both Kinga and Anupma were recently hired by this section.

Veracity is a data platform and ecosystem for digital innovation and industry collaboration within the maritime, oil & gas and renewable energy industries. Its aim is to reduce the costs to users of innovation, collaboration and the implementation of new digital services and solutions.

One of Norway’s largest software houses

Many people know DNV best as the world's largest classification society, but the 150-year-old company also houses one of Norway's largest IT environments. The company, which is owned by the Det Norske Veritas Foundation, verifies and uses customers' enormous data sets to make fleet operations safer, smarter and greener.

Øyvind Strand heads Veracity’s Norwegian development section, and was involved in hiring both Kinga and Anupma. 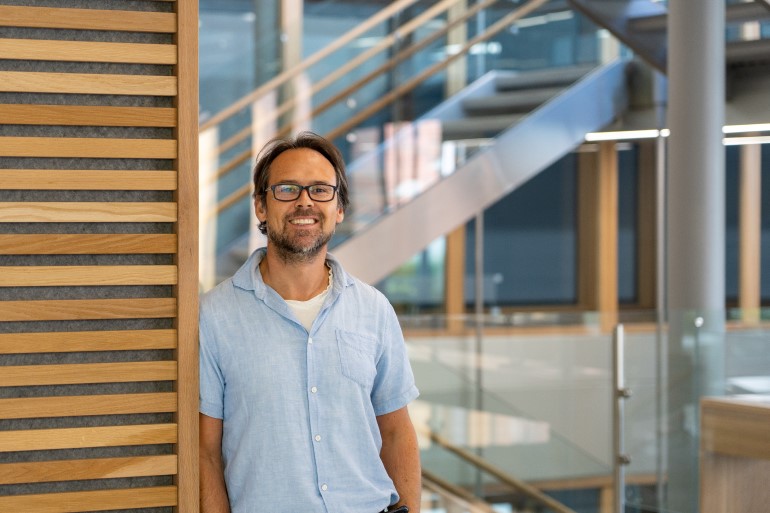 “I’m head of Veracity’s Norwegian development section, which is part of the global Veracity organization. We’re a total of almost 200 people working on the development of digital services and products. Most of us are based in Norway, but we also have offices in China and Poland, among other places,” says Øyvind.

The section he heads has the people and knowledge to develop robust, scalable and user-friendly digital services. He tells us they are always looking for more digital talents who are curious about new technology and want to use their knowledge to solve large and small challenges facing industry  - preferably where access to data and analyses is an important part of the solution.

“Our team consists of all the people needed, including computer scientists, software developers, project managers, innovation people, UX/UI designers, software testers and data analysts. There is a lot of interest in data in the organization, and that’s important to those of us working on computer science, data engineering and data modelling. We also have many digital talents with broad expertise,” he adds.

Kinga and Anupma are the latest additions to the team and have been employed as a UX/UI designer and Full Stack Software Developer respectively.

“We were looking for people with a passion for building digital expertise combined with acquiring more domain knowledge. We felt we really found this in these women, and saw their potential to build a good career for themselves in DNV.”

“We have a very diverse team in terms of culture, language and expertise,” says Anupma Kumari, who was recently hired as a Full Stack Software Developer for DNV’s Veracity Data Platform. 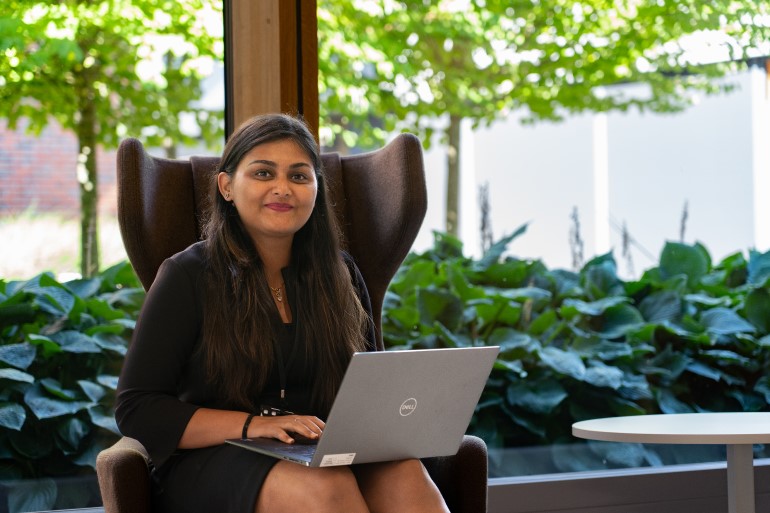 Kinga and Anupma originally come from Poland and India respectively, so they agree that it is a great advantage that the business language is English.

“It’s good that speaking and writing Norwegian is not a requirement in DNV. In many companies, the social language is always Norwegian, but here there is a mix. We have a very diverse team in terms of culture, language and expertise.

For example, our team collaborates a lot with people in China and Poland. Everyone around me is friendly and easy to work with, and I haven’t experienced anything negative since I started,” says Anupma.

How they landed their dream jobs

The three of them have some thoughts about what it takes to land attractive IT jobs today, and share their five best jobseeker tips with us. Øyvind, who hired both Kinga og Anupma, says that some fundamental things should be in place.

“Some things are fundamental, but are perhaps even more important for that reason. Show up for the interview in plenty of time, especially if you have never been to the location before. If you are unlucky and let us know you will be delayed, we understand that such things can happen. At the same time, a first impression means a lot, so don’t give the idea that you are unreliable.

Read all the emails you receive from the recruiter carefully and be well prepared. If you are asked to solve a task or prepare something for the interview, take this opportunity to impress the interviewers,” urges Øyvind.

“The first thing I do is read the applicants’ CVs and look at their summaries and highlights. I usually have to read through many CVs, so it’s important to have a neat and clear CV that makes it easy to remember you and who you are,” says Øyvind.

3. Be curious and clear about your interests

“It’s important to show us who you are. It’s a great advantage if you are clearly interested and manage to communicate your own wishes and expectations. It’s difficult to find your dream job if you don’t know, or can’t manage to make clear, your own wishes. Maybe your dream job doesn’t exist yet, and in such case we have to create it together,” says Øyvind.

In DNV’s career model, all career paths are equally valuable, both technical and traditional management careers. The model is flexible and it is fully possible for employees to change career paths during their career. The company has a large internal job market that includes more than 100 offices worldwide, which provides a fantastic career springboard for new graduates.

“I think that in my case it was my eagerness to get the job that made the difference. I tried to show my best qualities and skills, took the task I was given during the interview very seriously and handled it well. At the same time, I was determined, which I also think is important,” says Anupma.

Her manager agrees with her.

“Definitely. We chose you instead of many more experienced people, and a lot of that was due to the atmosphere you created by being positive and curious. You also managed to show us what is important to you, that you are reliable, and that you are a person who is able to stretch yourself a little, which fits in with our way of thinking,” adds Øyvind.

4. Be someone that other people want to work with

“We look for people who can do good work for colleagues and the team as a whole and who seem pleasant to work with,” says Øyvind Strand. 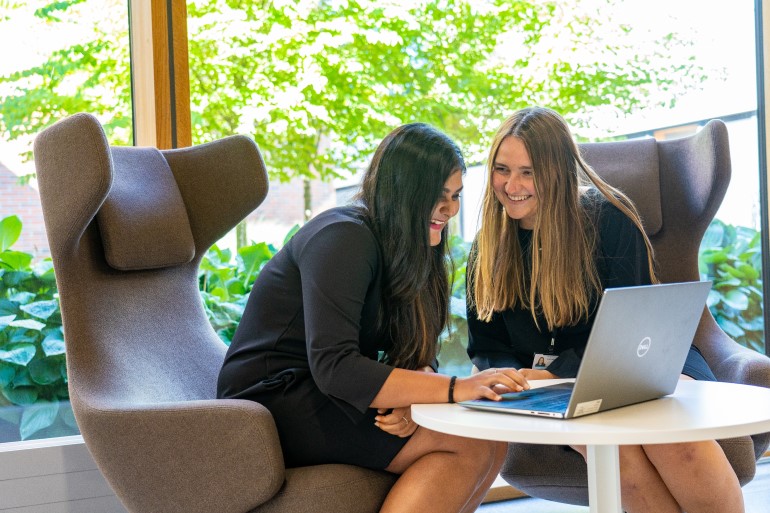 “Show that you’re a good colleague and team player. We look for people who can do good work for colleagues and the team as a whole and who seem pleasant to work with. The common denominators between Kinga and Anupma are that they are both determined and cheerful, they are curious and eager to learn from their colleagues, and last but not least they are reliable. They quite simply contribute to a good working environment,” says Øyvind.

5. Keep calm and do your best

“I think you will go far if you manage to stay calm, be confident of your own skills, and do your best during the interview and on any tasks you are challenged to carry out. Think that there’s a reason why you have been called in for an interview, and that those who are interviewing you want you to do as well as possible,” says Kinga.

She also says that starting a new job with DNV is nothing to worry about either, since the company has a good training scheme for new employees that is adapted to suit each individual.

“Employees are assigned both an experienced supervisor who advises them on technical issues and a buddy who helps them with all other practical matters. My colleagues on the team have also been very helpful and always respond quickly if I need help with anything,” concludes Kinga.