The concept of HIL testing 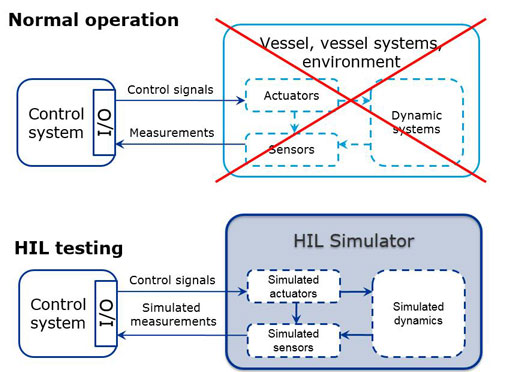 In HIL testing, the control system is viewed as a black box. The system vendors do not disclose any of their source code, since no first-hand knowledge of the inner workings of the control system is necessary. Test cases and acceptance criteria are based on functional descriptions, user manuals, class rules and regulations, and industry standards.

In the automotive, avionics and aerospace industries, HIL testing has been established as best practice to meet the requirements for performance and reliability. Comprehensive HIL testing of electronic control units (ECUs) is done both by automobile manufacturers and their suppliers. It is considered essential to reach the necessary safety levels and avoid vehicle recall campaigns. ECU examples include ESP, ABS, cruise control, automatic four-wheel drive, fuel injection, ignition, and turbocharger control. In the space industry, NASA has utilized HIL testing extensively at its Independent Verification & Validation (IV&V) Facility for testing mission-critical software components on spacecraft. In the aerospace industry, HIL testing has been used in programmes such as Future Combat Systems and Joint Strike Fighter. Example of our PMS-HIL simulator and some failure modes: