When the Shell Eco-marathon starts in England at the beginning of July, there is a gang of NTNU students who will be extremely excited. The car they have spent a lot of the past academic year designing, testing and building will be on the starting line.  Ready to compete with around 200 other entries from all around the globe for the title of the world's most energy-efficient car.

"To put it simply, the task is to develop and build an electric car that is as energy-efficient as possible," says Eirik Evjan Furuholmen. He will soon graduate from the Norwegian University of Science and Technology (NTNU) with a master's degree in mechanical engineering, and has been DNV Fuel Fighter's project manager for the past year. He is in no doubt about the reason for this project attracting so many eager engineering students at NTNU.

"The light in the eyes of a student who has been up all night to solve a problem and almost can't wait for the others to sit down at the team meeting in order to explain the solution demonstrates the project's real value," says Furuholmen. "It's a huge step from sitting alone solving problems in the auditorium, with fixed frameworks and defined answers on paper, to collaborating with others to solve complex, real problems without a known solution."

These words are music to the ears of Tommy Bjørnsen, DNV's country manager in Norway. This company has been the main sponsor of the DNV Fuel Fighter project at NTNU for 11 years in a row. However, although a good result in the Shell Eco-marathon is strived for, the competition's results are not of primary importance to DNV.

"We are mainly sponsoring an opportunity to learn through an interesting and multidisciplinary project with a focus on sustainability and energy-friendly solutions. The fact that the students also get to work in a multidisciplinary team and contribute to solutions that are safe, smart and green also fits in well with our way of thinking in DNV," says Bjørnsen.

"To give the students a better understanding of what they are to do – build an energy-efficient car – we hold an adapted version of our own technology-qualification course for them. Here, they learn a lot about risk management and reliability. Continuous planned testing from beginning to end has a huge effect on safety and the end-product," says Bjørnsen.

On behalf of this year's student group, Furuholmen can confirm that the intention behind the sponsorship works.

"NTNU is a fantastic university when it comes to fundamental theory, and gives students a valuable toolbox for solving the problems of the future. However, I believe technical projects like DNV Fuel Fighter provide valuable understanding of how to use the tools to create something real," he says.

In addition, as the competition approaches, a childhood dream is coming true for Eirik Evjan Furuholmen.

"When I was seven years old, I decided to become a car designer. My older brother studied industrial design at NTNU at that time, and I decided to do better than him," he says.

"I think seven-year-old Eirik would have been quite pleased with what we have achieved." 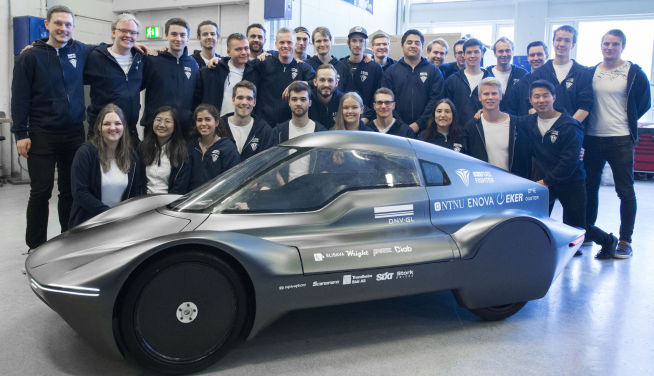 The market's most energy-efficient electric cars have a range of around 7 km/kWh when driving in towns. That's nothing when you look at what former student teams have achieved in the Shell Eco-marathon's "Urban Concept" class, which simulates town driving. To beat the prevailing world record, a car will have to manage around 190 km/kWh. That means almost 30 times the range of the market's best cars with the same energy volume, and Furuholmen believes the car built by this year's student group can do that.

"We unveiled the car at the beginning of May and the design was very favourably received. In addition, we have worked really hard on the chassis and managed to reduce the weight by almost 45 per cent since last year, as well as improving the aerodynamics by 25 per cent," says Furuholmen enthusiastically. "With our second place last year, we should therefore have a good chance with this year's car."

This year, the team consists of 40 students on 12 different courses and from five different countries, and four students are writing about the project as their master's thesis. DNV Fuel Fighter has been registered as an academic subject and gives the students who take part 7.5 ECTS credits.

"We're very impressed by what the students have done so far. DNV Fuel Fighter is a specific project where tomorrow's engineers turn theory into practice and gain experience that is valuable and in demand in the labour market," says Tommy Bjørnsen.

For Furuholmen and the 39 other students taking part in this year's DNV Fuel Fighter project, the weeks leading up to the competition are now about testing and perfectioning. The focus right now is on the competition in England, but the students know very well that the past year has been about so much more.

"I think the most important thing is the freedom one has in such a project. It gives the students a place in which to be creative and curious, and to find out what makes them tick in a professional context," says Furuholmen.

"Smart" in the same way as our electronic gadgets?

How the detectives work in the industry's "CSI"

Trying to set a world record

Breaking down traditional boundaries between software and machine learning

Can batteries be part of the answer to how the shipping industry can help to build, instead of impede, the road to a sustainable future?