"There's a lot of talk about what the world's energy future will be like. But it's difficult to know what viewpoint is correct. Should we listen to an organization that represents the interests of the oil and gas industry? Or an environmental organization with a green agenda?"

These are questions asked by Sverre Alvik. He is head of energy transition research at DNV. The company has now published the third edition of its annual Energy Transition Outlook, a report that aims to provide an independent perspective on the energy needs of the future and how these needs will be met.

"We think we should listen to everyone. But we also think there is a great need for an objective forecast. While emotions have been important for creating the huge interest in climate and environmental issues that we see today, it is important to have an objective view of the facts when joining together to find good solutions," he says.

DNV's report shows that the world is facing a huge energy transition. It concludes that the energy system will be completely different in 30 years' time, that energy consumption will level off and that emissions will be reduced. Nevertheless, we will not be close to reaching the Paris Agreement's goals.

"We've increased our energy consumption and emissions year-on-year, and the renewable energies we are currently installing just go on top of all the rest. It's not enough just to stabilize emissions, we have to cut them. We actually have to halve our emissions every 10 years in order to reach the goals set in the Paris Agreement. That's not happening," says Alvik.

He points out that DNV has created a model that provides the best possible fact-based estimate of what global energy usage will look like in the future, taking into account the political, financial and technological progress that we can count on.

Renewable energy sources will take over

"There will be more people and less poverty in the world. However, we will actually use less energy," says Mats Rinaldo.

According to the report, the world will be electrified in the next 30 years. Oil consumption will peak during the next five years, and half of the cars sold in 2032 will be electric. In 2036, 95 per cent of the world's population will have access to electricity. Mats Rinaldo, who has been a principal researcher in the work of preparing the report, says that even if the need for energy services such as transport increases, the total energy consumption will gradually decline:

"There will be more people and less poverty in the world. However, we will actually use less energy. The demand for energy will peak in 2033. After this, energy consumption will fall because we will use energy far more efficiently," says Rinaldo.

In order to achieve the two-degree goal set by the Paris Agreement, the world has a carbon budget we must relate to. If we exceed this budget, the temperature will rise by more than researchers believe is permissible.

Many people have pointed out that in future we will have negative emissions technology that can reverse emissions and global warming. Rinaldo says that this is positive but does not help a lot if the technology is introduced too late. 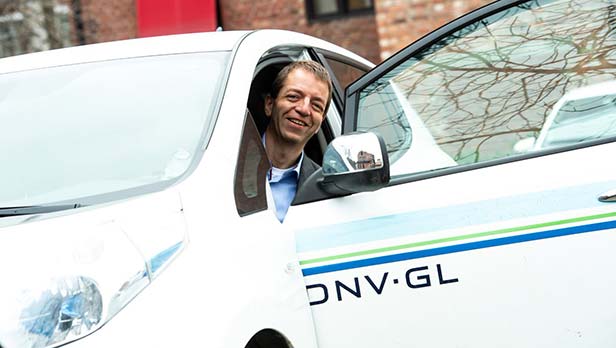 "We hope that we're wrong in our forecasts for 2050 and that the reality described in this report is used as a decision basis for extraordinary measures to close the gap between the path we're on and the future we want," says Alvik.

"How can we deal with these challenges? Is it still possible to reach the goals of the Paris Agreement?"

"It is still possible, but requires a huge effort," he says.

In the report, DNV describes the three measures that are necessary: we must improve our energy efficiency, increase the share of renewable sources in the energy mix, and capture and store larger volumes of carbon.

"It doesn't help to make massive efforts in one or two of these areas. Nor does it help to do a little in all areas – we need huge efforts in all three areas if we are to have a chance of reaching the climate goals," he concludes.

These five tehcnology trends will define the industry

DNV looks 10 years into the future

DNV can provide IT and technology undergraduates with valuable job experience

We don`t stop ships for no reason